We acknowledge that Breslau Mennonite Church (BMC) stands on the traditional territory of the Haudenosaunee, Anishinaabe, and Neutral peoples.  We, as settlers, recognize and appreciate their connection to this place, long before Mennonite settlers came to live on this land. We are grateful for the opportunity to meet here and reaffirm our collective commitment to make the promise and challenge of reconciliation real in our community.

After the American Revolution, Pennsylvania Mennonites (Swiss-German) also came to what we now call Ontario seeking land to farm because land was becoming scarce and expensive in Pennsylvania.  Parents of large families found it impossible to provide farms for their children. An additional factor in the immigration was the fact that after the American Revolution, the American government did not guarantee the Mennonites their former right of exemption from war activities.  They wanted to live in peace and harmony with freedom of speech and religion. 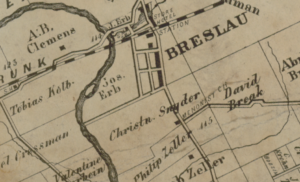 In 1796 the Haudenosaunee leader, Joseph Brant or Thayendanegea sold Block Two (Waterloo Township) a 94,012 acre tract to Richard Beasley. Beasley, in turn, sold a 60,000 acre tract of this land to Mennonite farmers from Pennsylvania who joined together to form the German Land Company in November 1803.

Around 1815 Pennsylvania Mennonite families began settling in the Breslau area of the Block Two lands.  The farm on which the church is located was first owned by John and Nicholas Cressman.

These local Mennonites had worship services in schools or in their homes, organizing as a congregation in 1826. The congregation was known as Cressman Mennonite Church.

Joseph Hagey is considered the founding leader of Breslau Mennonite Church, which is as old as the community of Breslau itself. 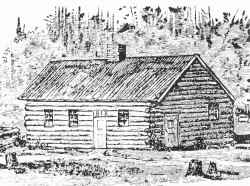 In 1834, the Benjamin Eby congregation in Berlin (First Mennonite Church in Kitchener) outgrew its 1813 log meetinghouse. The building was disassembled, moved to the Christian J. Snyder farm in Breslau, and reassembled on an acre of land later deeded in 1837 by Snyder to the Mennonite Church.  The selling price was one pound  or about $5, and it was stipulated that the property must be used solely for a meetinghouse, burying ground, and school for the Mennonites and all people in the area.

That log structure served the congregation until 1856 when a larger brick building was erected. The log church was moved into the village of Breslau and converted into a local residence.

Sunday School was first held in the church in 1877. 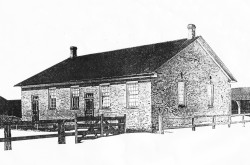 Tensions came with the division in the Mennonite Conference of Ontario and some members of BMC left to join the Mennonite Brethren in Christ Church, commonly called the New Mennonites.  By 1882 the Breslau Evangelical Church was formed.

The first language of worship was German, the language of our early settlers. The transition to English occurred in the 1890s. 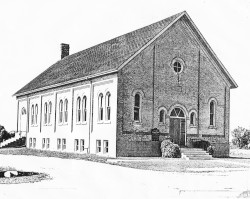 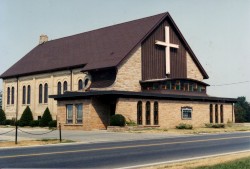 In 1968, an addition was built onto the front of the church, and other renovations were completed. In July of that year the name was changed from Cressman Mennonite Church to Breslau Mennonite Church.

The MARC building was built in 1976 – 77. MARC stood for “Mennonite Arts & Recreation Centre”. This building had various uses for the church and community.

By 1989, BMC recognized the need to expand its building. The MARC building was torn down in preparation for the new construction.

w main church building was added to the existing building. This consisted of a bigger sanctuary, a gymnasium, a library, a nursery, three offices and a large, sunlit foyer.  A bricked outdoor courtyard touches both the old and the new buildings. The cornerstone was laid in 1990, and by 1991 the congregation moved into the new addition.

Over the years BMC purchased several adjoining properties for its future.  In December 2019 BMC sold land to Reid’s Heritage Properties for a seniors’ housing development.  Completed in 2020, the apartment complex is named Joseph`s Place after the church`s founding leader Joseph Hagey and the founder of Breslau, Joseph Erb.

Throughout its history, BMC has welcomed visitors and peoples who are new to the community.